For larger companies months of preparation goes into IBC.  Europes largest broadcasting conference and exhibition is held annually in Amsterdam and as quickly as it appears it disappears.  If you have yet to experience IBC it’s worth a visit flights from the UK are cheap and fast enough but be warned a day may not be enough to get round the many halls pack to the rafters with video production, post and other equipment and other ancillary equipment. 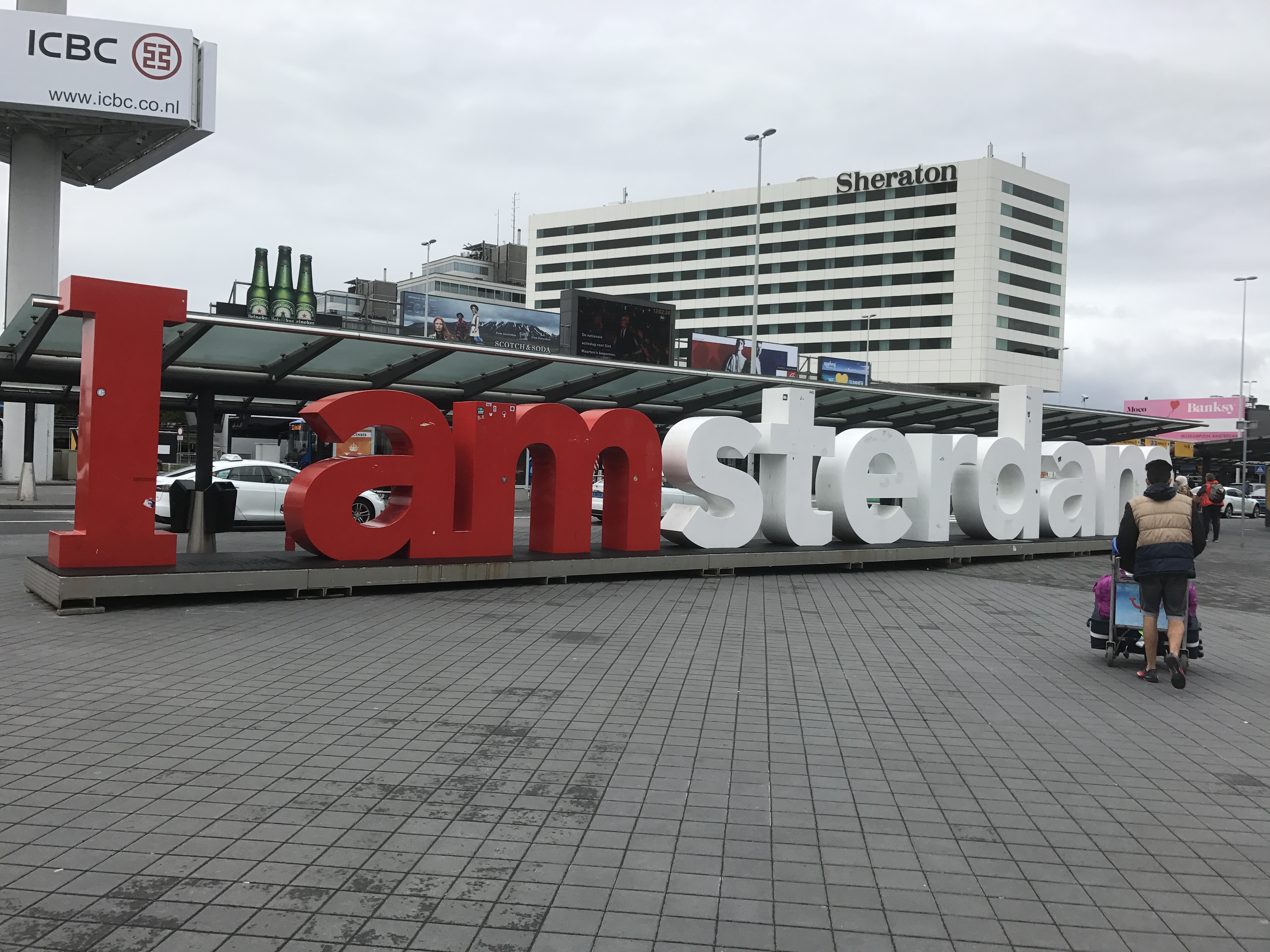 I’ve been travelling to Amsterdam for the IBC show since the mid 90’s and consider myself a veteran, there is a small contingent still working in the industry who remember when the show was held in Brighton – back in the good old days I’m told.  IBC held their inaugural show in 1967, this year marked 50 years of the show and what a show.

Arriving at Schipol airport at 09:30 on a Saturday morning we jumped into many of the waiting taxis and headed to the RAI centre, home of the exhibition and convention.  After collecting our pre-registered tickets we headed up towards hall 12.  The exhibition is huge, that isn’t an understatement.  Talking with a client they told me their smartwatch had clocked up 7.2 miles walking around the show the previous day.  Hall 12 you see is the hall that contains the most relevant equipment to us, it’s full of production gear. 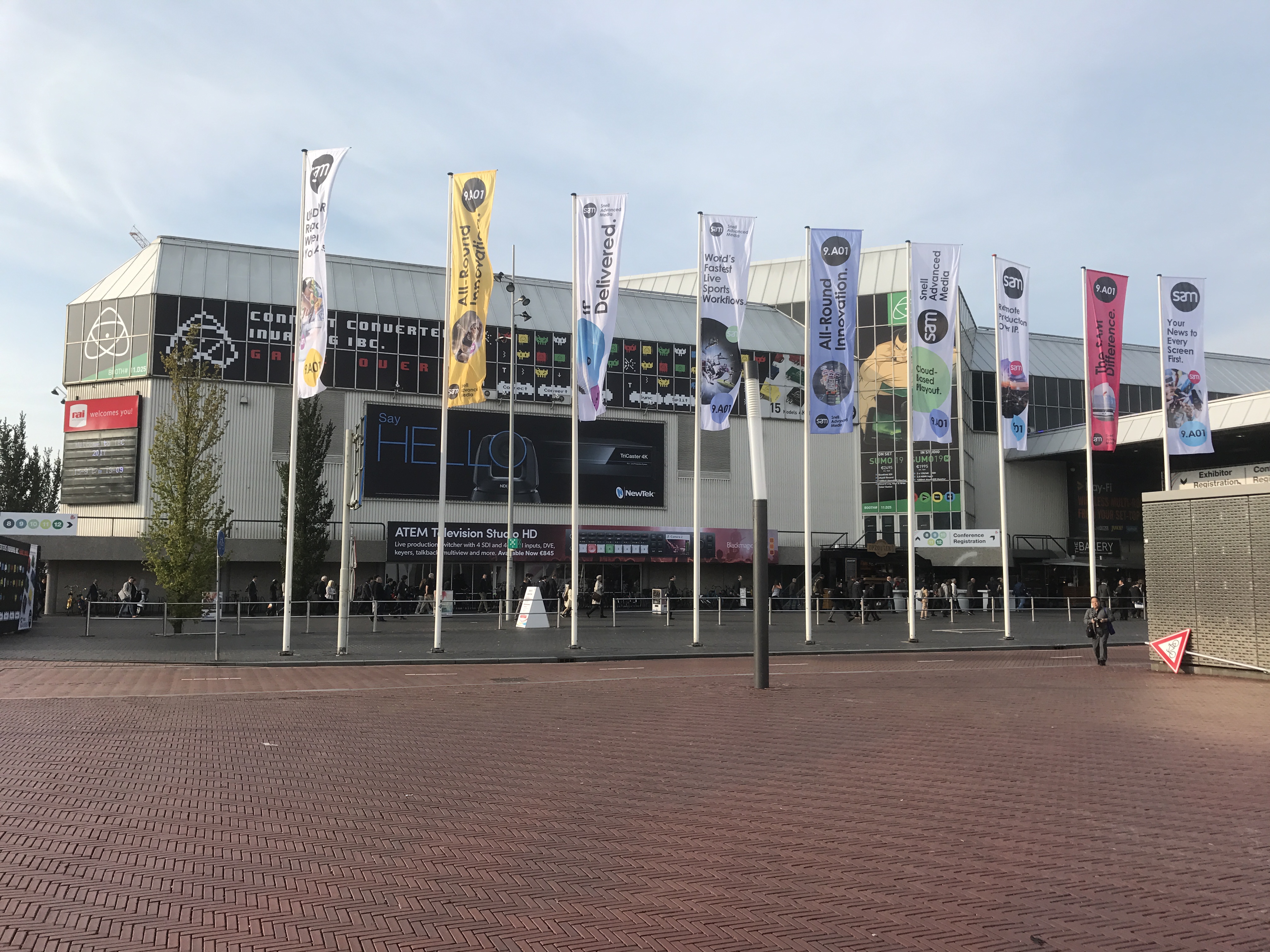 You need to head to IBC with a clear plan, you need to know where you are going, what you are hoping to see, what you want to achieve.  You need to have your evenings planned, who’s stand drinks are you attending, who’s party are you going to later and when you plan to get to bed so you can do it all over again the following day.  It’s hard work!

This post although entitled ‘all the new gear’ isn’t really that.  It’s the new or newish gear that caught my eye, the kit I wanted to check out, have a closer look at and fiddle with.  Thats what exhibitions are for after all.  With now further back-history, waffling or reminiscing lets take a look at what caught my eye: 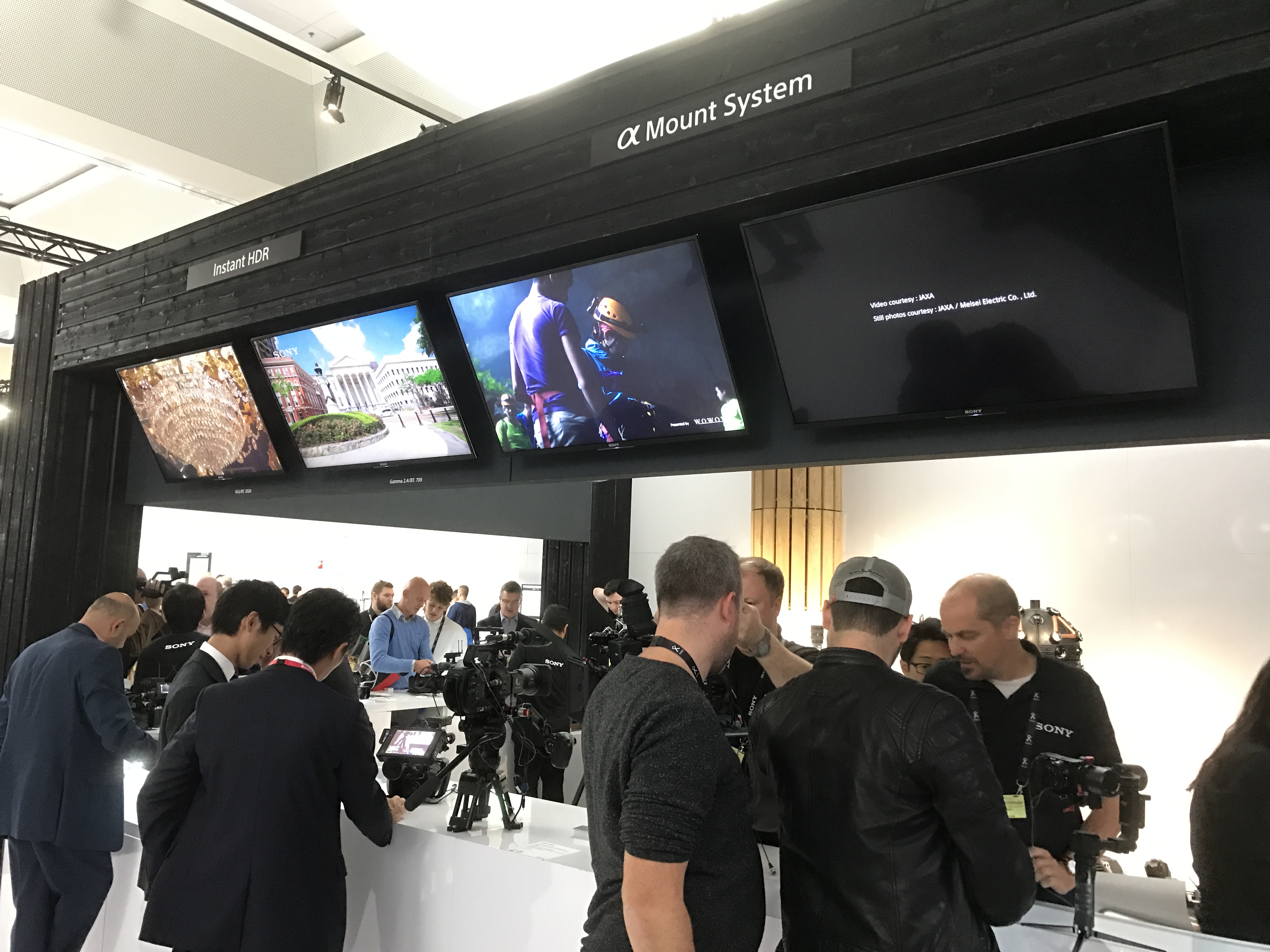 As ever Sony were busy, very busy.  Apart from Venice – which to be fair is out of reach of the most there wasn’t any really big announcement from them.  There were a couple of little announcements that are actually quite big deals.  Ladies and gentlemen, introducing the Sony PXW-Z90: 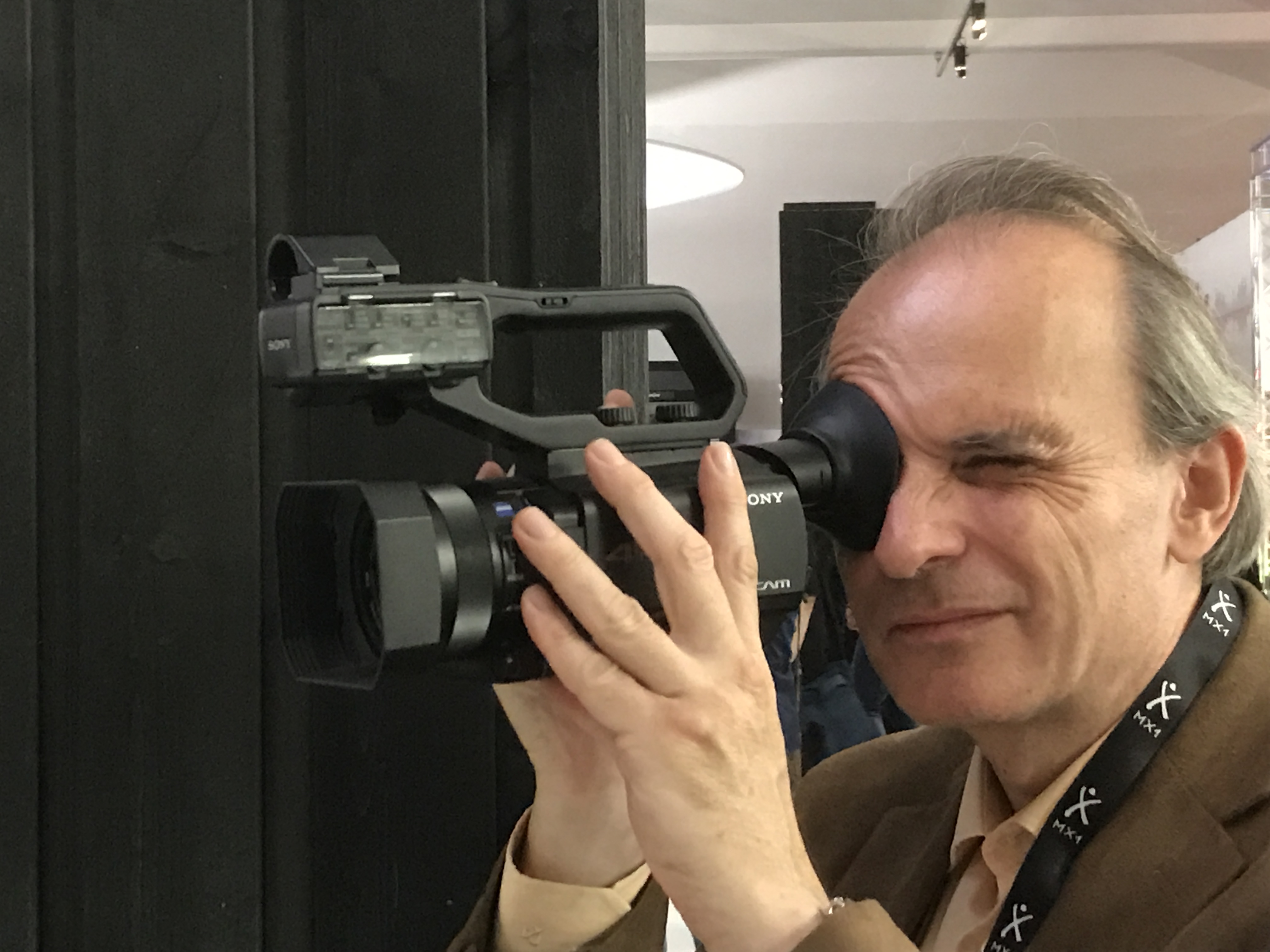 It doesn’t have interchangeable lenses – I know, I know.  But stop, don’t skim past – this is an amazing little camera.  An update to the Sony PXW-X70 the Z90 takes many functions from its big brother the Sony FS5 and Z150 and shoehorn them into this diminutive camera body.  The Z90 is a XAVC-L camcorder that shoots HD in 10bit 4:2:2 at 50mbps, it also shoots 4K 8bit 4:2:0 at 100mbps out of the box, no extra licenses – unless you want MPEGHD.  Improvements over the X70 include the addition of the Z150’s EXMOR RS sensor, this 1″ chip provides a Super 16 sized format that makes this an ideal run and gun machine as well as offering a restricted but still useable slightly-shallow depth of field.  This is a superb machine.  The Z90 will shoot 1000fps in a crop mode as well as offering infrared nightspot mode.  A removable handle provides XLR inputs and when removed exposes a Sony multi interface shoe which accepts Sony radio mics without cables or batteries!

The RX0 is Sony’s other little announcement.  Although announced before the show this was the first outing for this remarkable camera.  Again a 1″ sensor equipped rugged camera that faces squarely up to the GoPro and screams I’ve got a Zeiss lens!  Sony obviously are pushing a number of applications including the 360 setup you can see in the photo above, tasty. 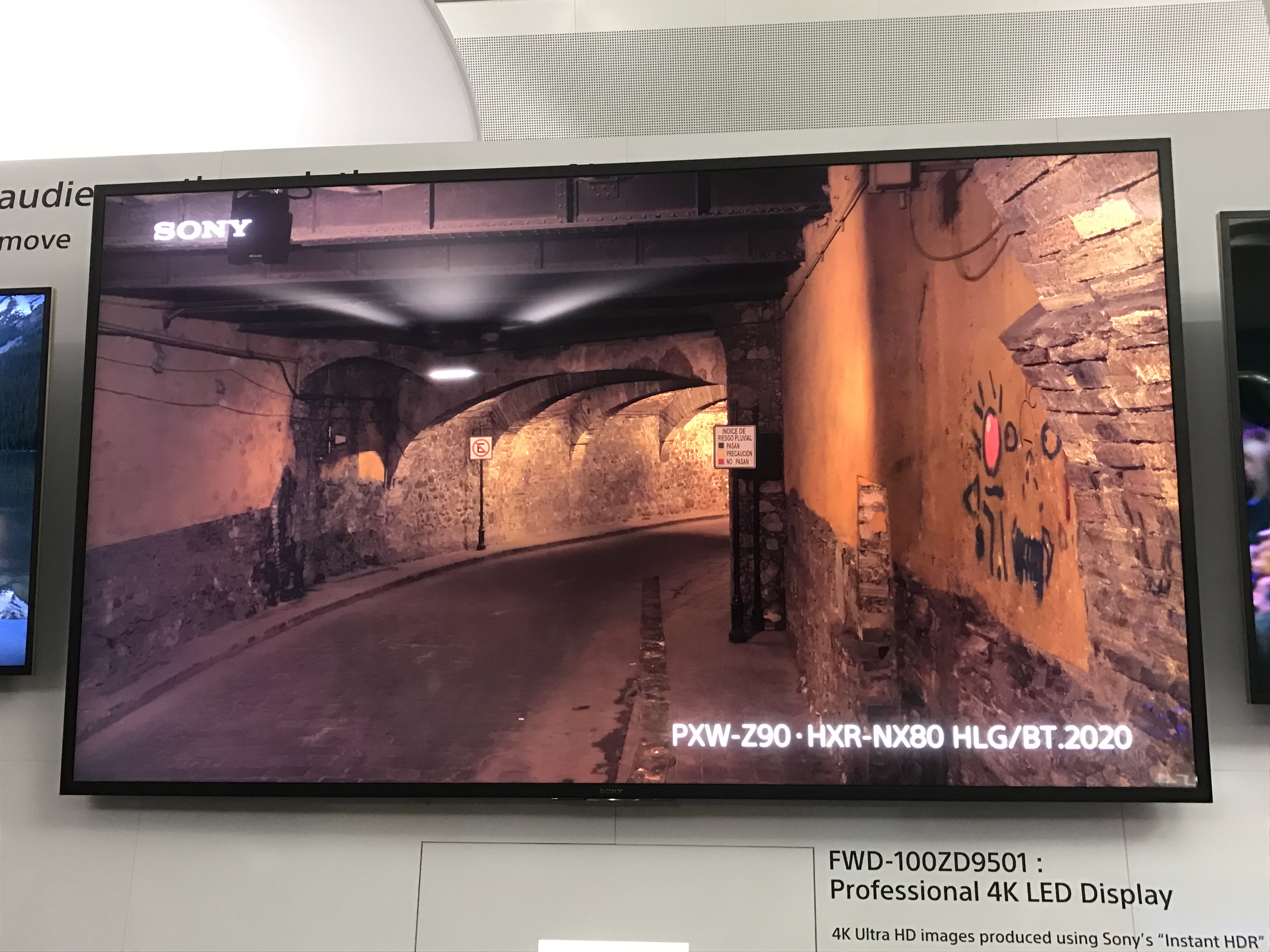 Coming back to the Z90 another push is instant HDR, am mode that the Z90 supports.  This increased dynamic range will display perfectly on Sony’s range of professional and consumer 4K televisions and monitors. 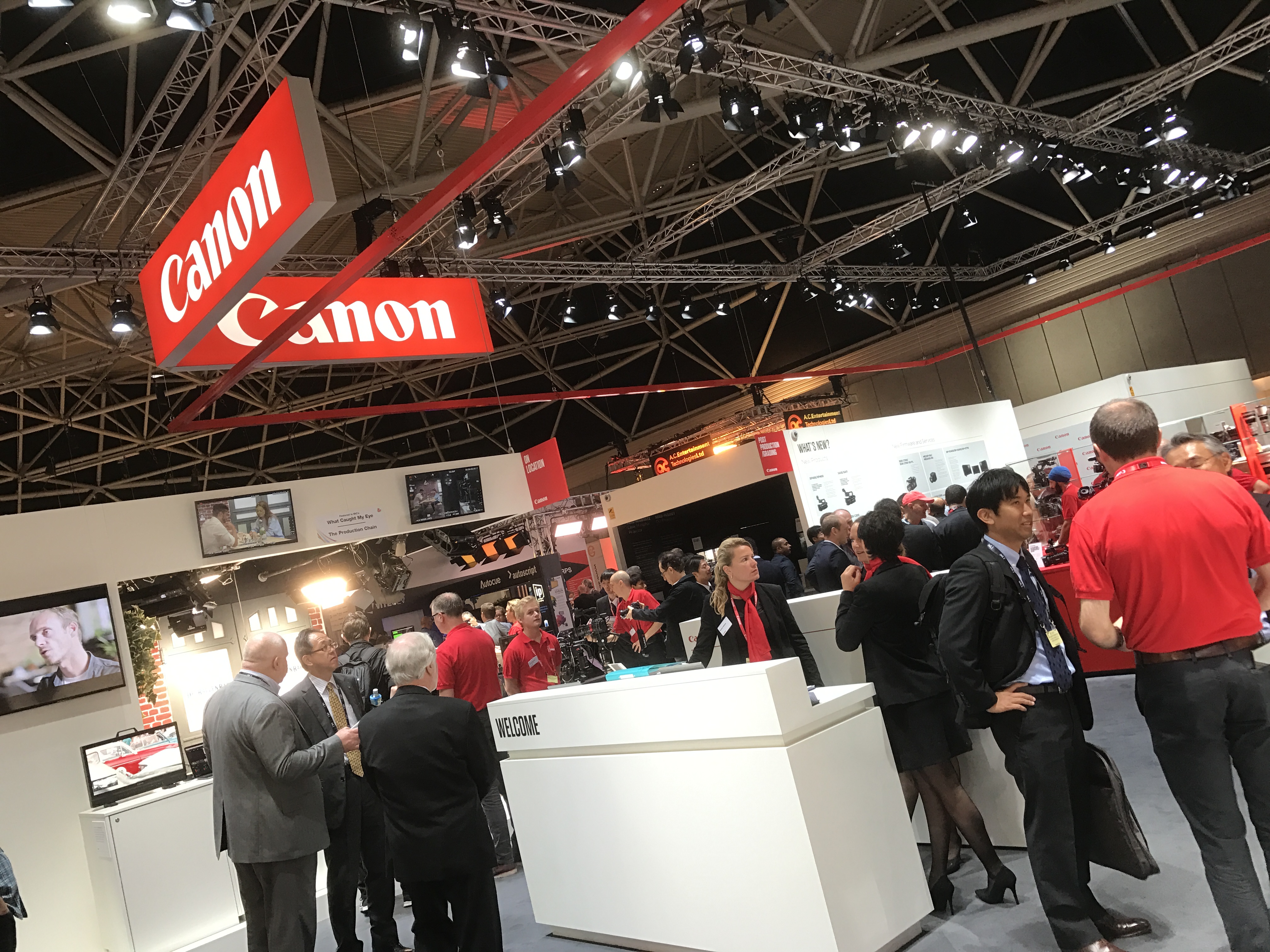 Canon also had a huge stand showing their range of professional offerings including the C200.  The C200 was displayed as a bare bones setup, in a cine configuration and stripped down on a gimbal.  We’ve had a lot of mixed reactions to this camera but spending time playing, talking through the workflow opened my eyes to the significance of this machine.  It is a funny thing, MP4 at one end and RAW at the other without anything in between.  Being on my third RED camera RAW is something I am familiar with and I was keen to see how the workflow flowed.  Canon were promoting their software which will allow you to tweak your RAW footage and transcode to an edit ready format – it is still in development stage, although you can download it today. 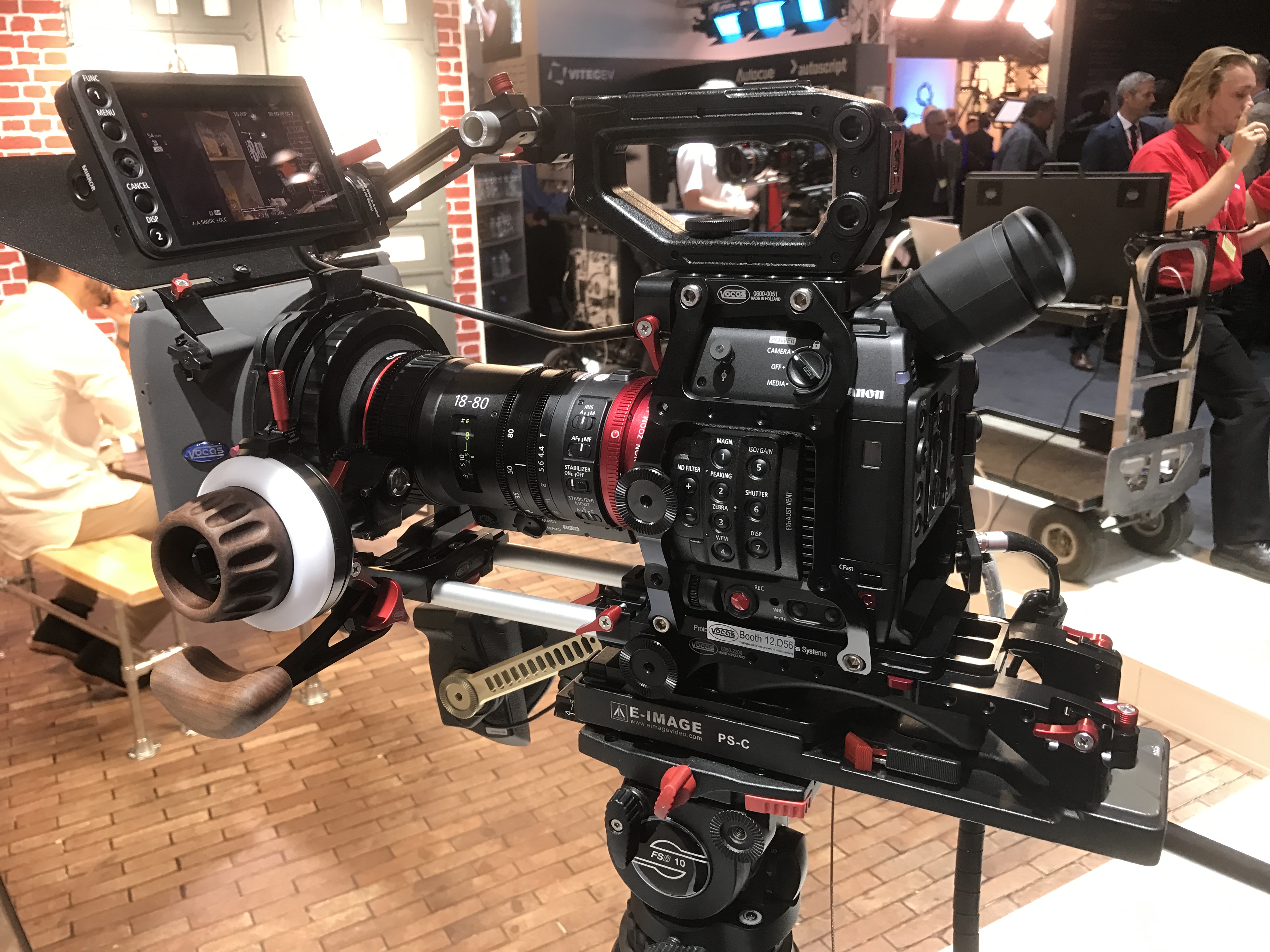 The Canon software will allow you to correct exposure, sharpness and white balance.  In my opinion in has two shortcomings:  1. You can only play back the footage at full resolution, meaning if your computer is not the latest, fastest and most expensive all you will get is a jittery mess.  2. Whilst correcting exposure, white balance and sharpness you are reliant on judging these changes by eye – there are no waveforms or scopes to allow you to accurately and technically measure your adjustments.  Being said I’m sure this will all come.  Canon have a plan with the C200, it is ahead of the curve.  You can shoot today with it in 4K MP4 onto SD cards.  As CFAST comes down in price and as and when you want to shoot RAW your camera is capable and hopefully your computer will be up to speed.  The C200 is an investment, Canon stressed they won’t be updating this camera anytime soon.  That all makes sense.  The camera is equipped with Canon dual pixel autofocus as is the C300II and is a joy to use, it’s build quality is typical Canon – this camera is really quite superb, just misunderstood.

Boxing gloves on I fought my way through the crowds to get to the other camera that everyone is talking about – the Panasonic EVA1.  Whilst getting to the C200 was a walk in the park the EVA was like getting onto the underground in rush hour.  After a few minutes of typically English polite pushing I went full European and got up close and personal.  We’ve all seen photos, read the impressive specs and waited patiently for this camera to get out into the wild.  And wild it is, small and wild, lightweight and in all rather nice.  I was told the cameras at IBC were still pre-production units and they weren’t 100% yet.  Very close but not completely there.  With this in mind I’m not going to say too much until we see a final production unit.

In this price / size / performance range the EVA really was the star of the show.  Again built and displayed on gimbals, in a cine setup and bare bones for run and gun the EVA will prove to be a very worthy camera.  Can’t wait. 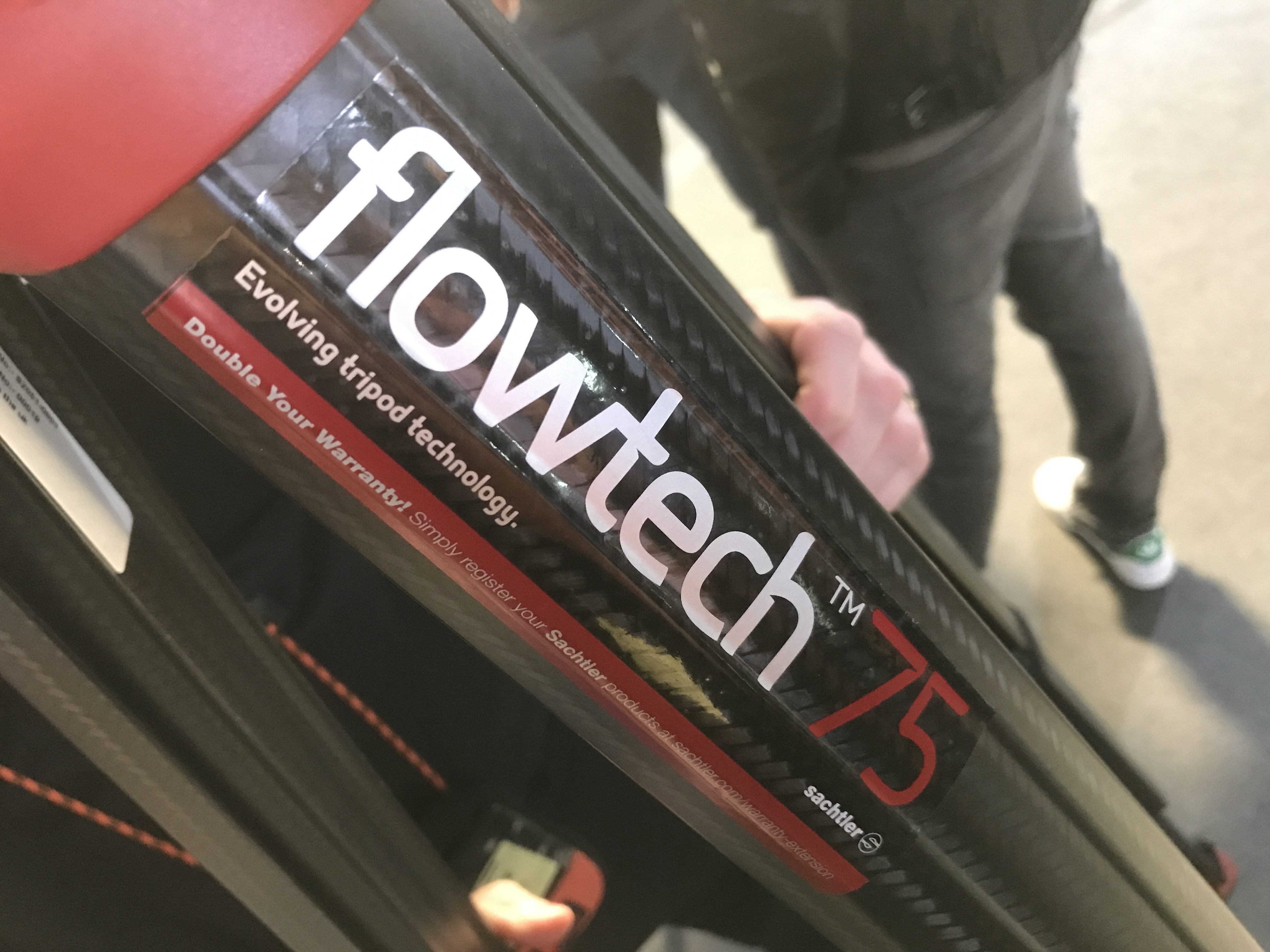 Honestly, I’ve never seen so many grown men looking so excited at the prospect at getting their hands on a long pair of legs.  The buzz around the new Flowtech legs was incredible.  I had to take a couple of photos to convey just how these legs stole the show on the Sachtler / Vinten stand.  Behold the Flowtech corner: 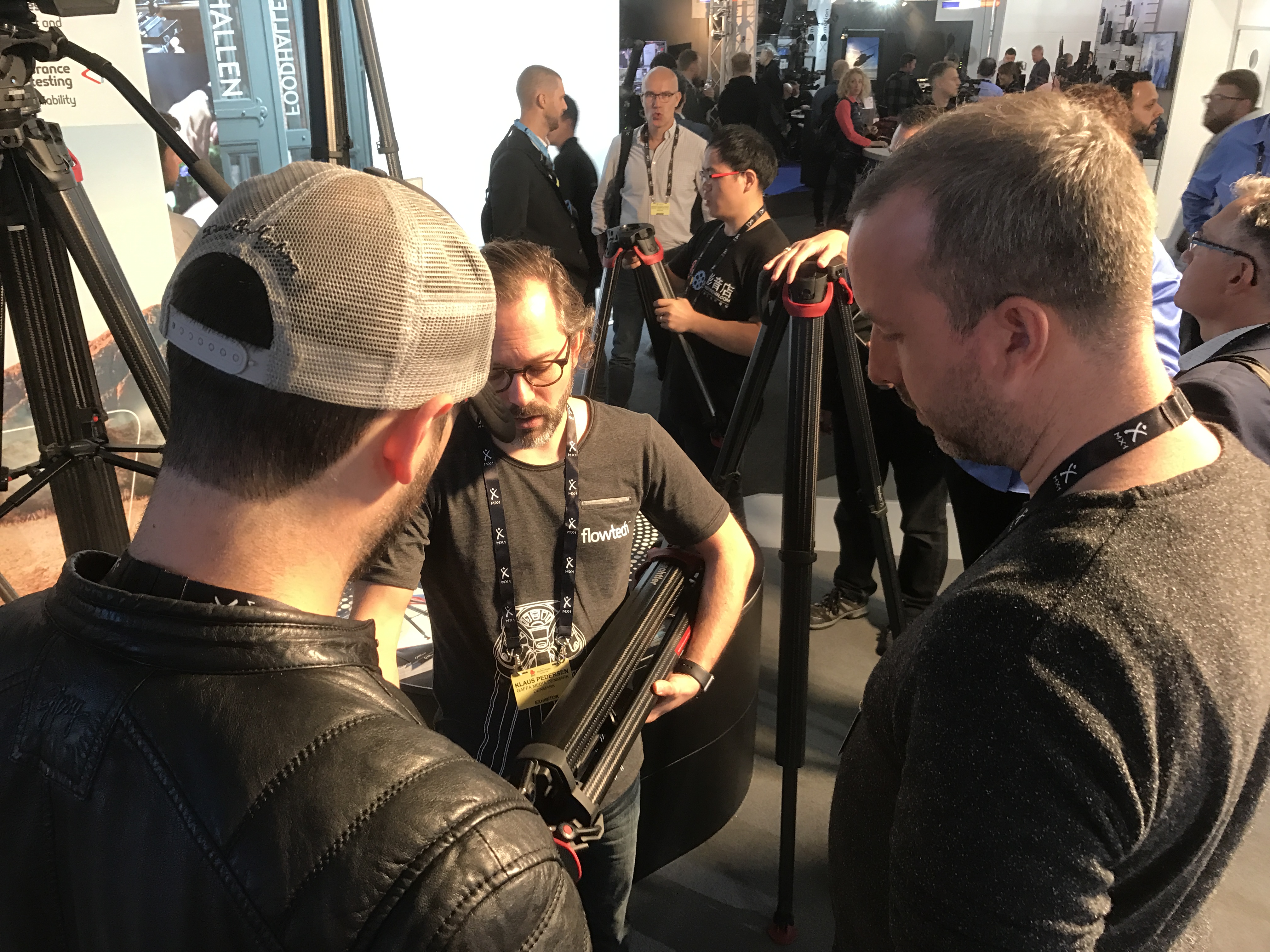 And just to the right the traditional tripod leg area: 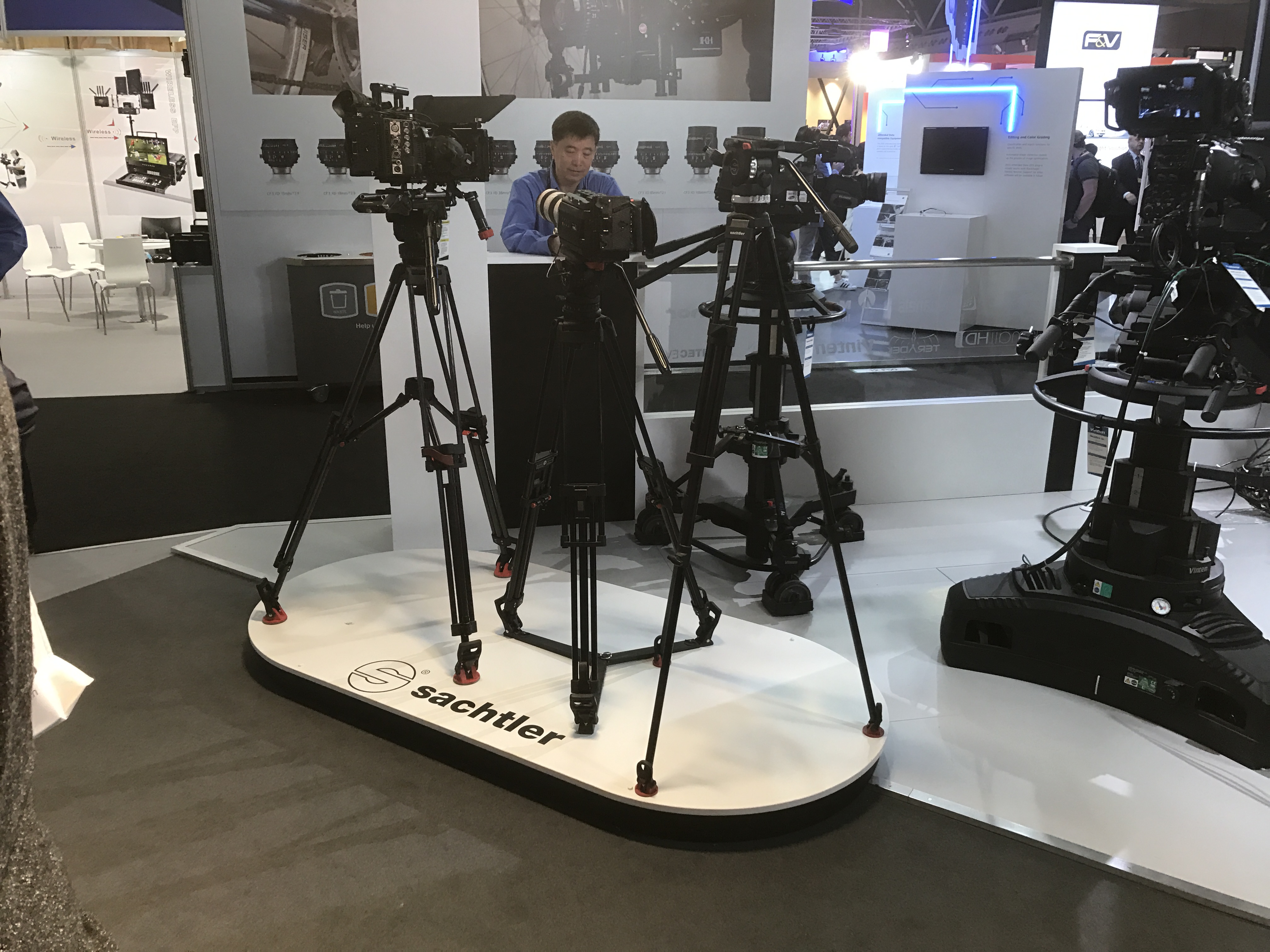 Amazing eh?  The flow tech is a beautifully made if not a little quirky looking tripod that is currently available in 75mm bowl size.  I asked the stand rep when the 100mm bowl version will be out his reply was “not to long, er… if they are making them, possibly” so rest assured that a 100mm version is in the works and imminent, er… possibly ;o).  The legs can be operated with or without a traditional mid level spreader and have one locking lever that releases the leg stages – quick and easy.  The legs have drain holes incase you use them somewhere wet and a small hex-head bolt at the top to allow the user to adjust the brakes if needed. 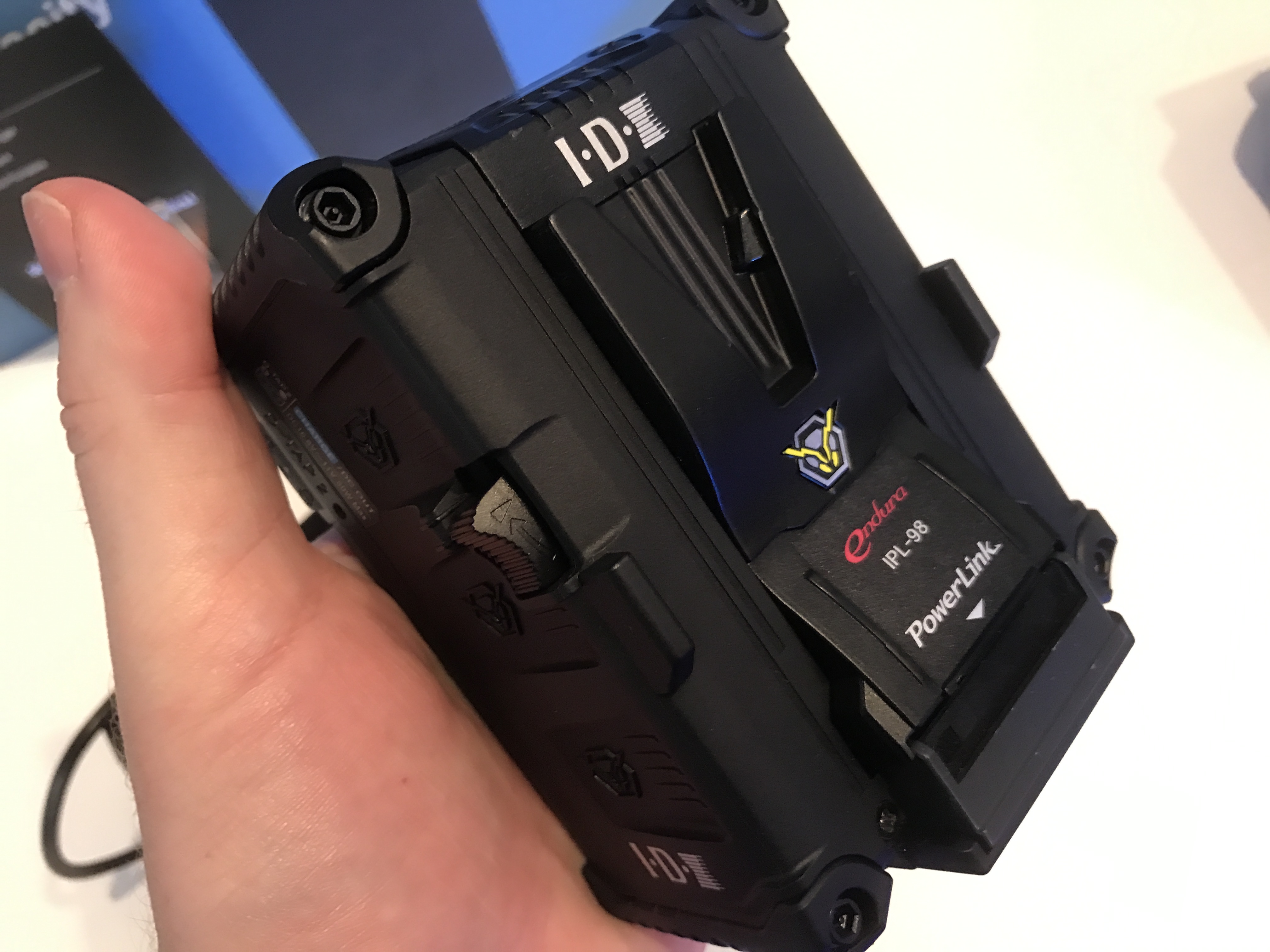 Just as Sachtler have made tripods sexy IDX have gone and given the modest and somewhat understood battery a makeover.  The new lightweight PowerLink IPL-98 is the beast.  Firstly and I have got to address the elephant in the room or rather the hornet on the battery, this is IDXs new logo and it has something to do with wasp sick.  Honestly, hornets regurgitate their food to give them energy – this battery looks “sick’ as the youths say – is that the link?  I’m not sure.  But this is a thing I promise.

As well as looking “sick” with rubberised corners, a torch for finding your stuff in the dark the key to this battery is the charging system.  Stack them up and they charge on certain IDX chargers.  The batteries on the top of the stack charge first so you can release them and start using them straight away.  When stacked on a camera the battery at the rear of the stack discharges first so again you can release and swap it over for a fresh battery.  Simple little clever ideas make this a great battery.  Also on display were consumer style batteries from IDX including Sony L (NPF), Sony BPU and Panasonic VBD style batteries with USB and in the case of the BPU a DTap also. 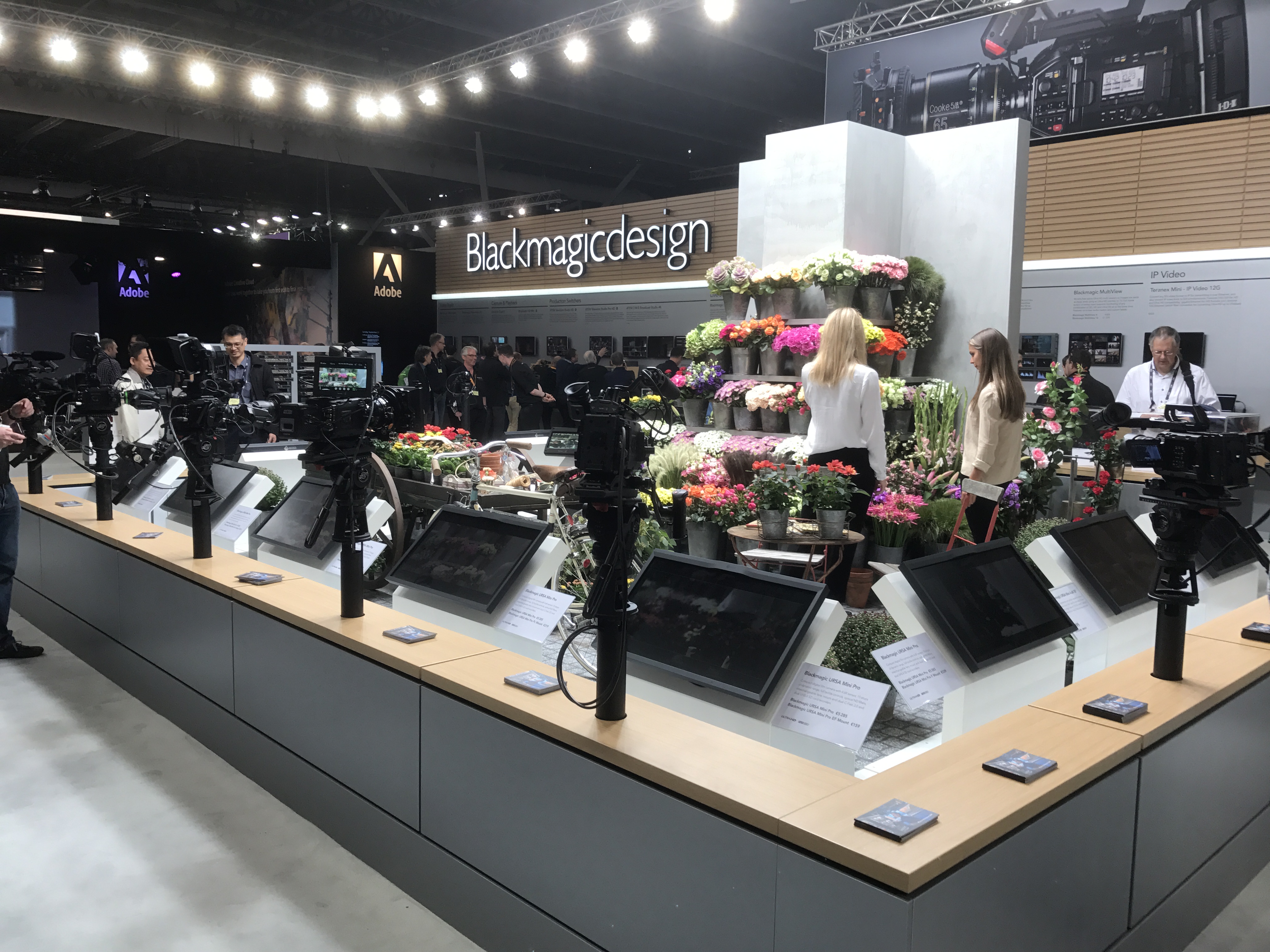 Despite a huge stand Blackmagic Design didn’t really have much new.  They were showing Ultimatte 12 but to be totally honest that isn’t really my bag.  What was new from BMD is a microphone holder for Ursa. 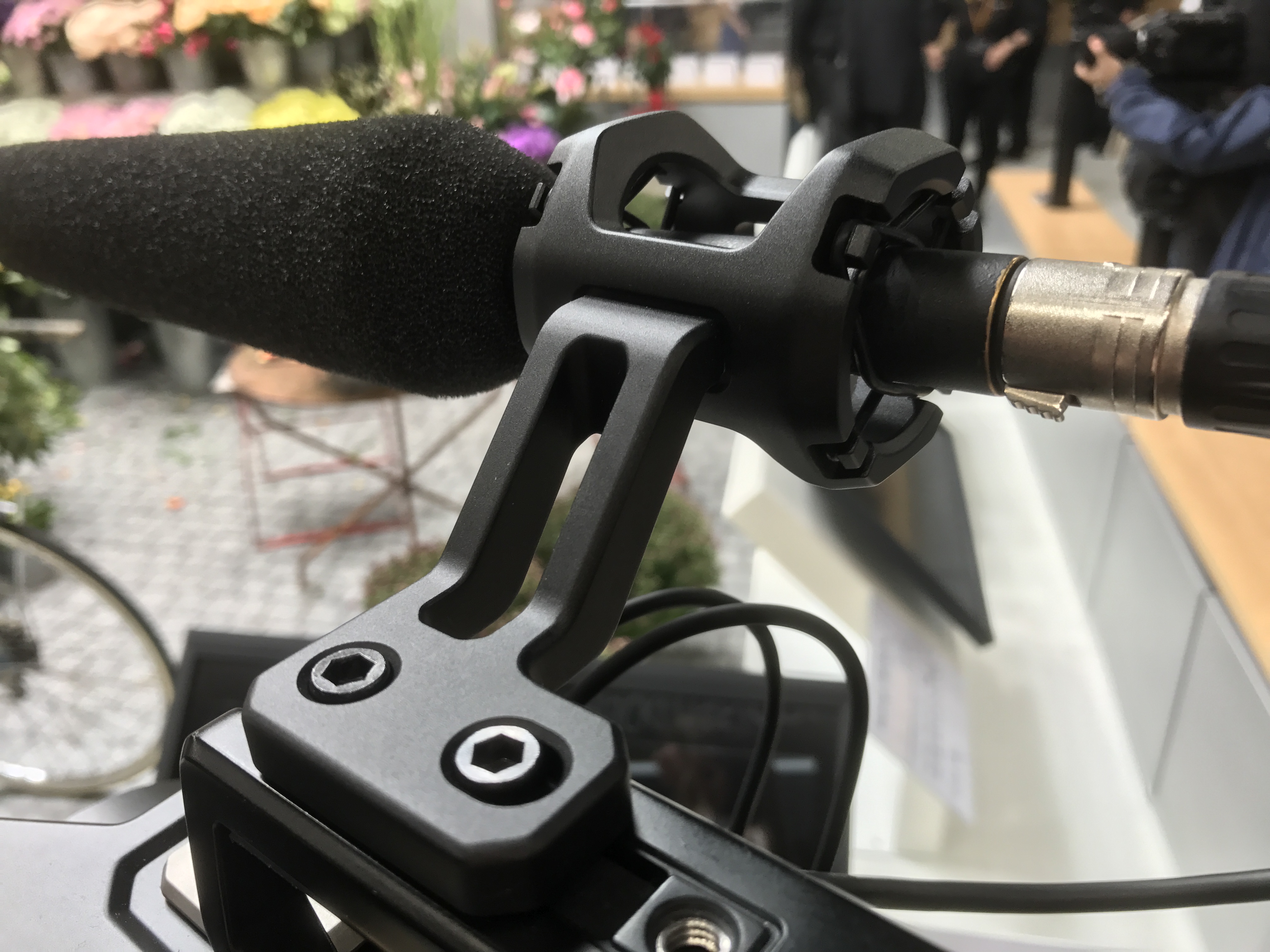 They did have all their cameras, converters, recorders, boxes and other products lined up for you to have a fiddle with.  The centrepiece of the stand was a couple of lovely ladies flower arranging.  To its credit the stand did smell amazing floral. 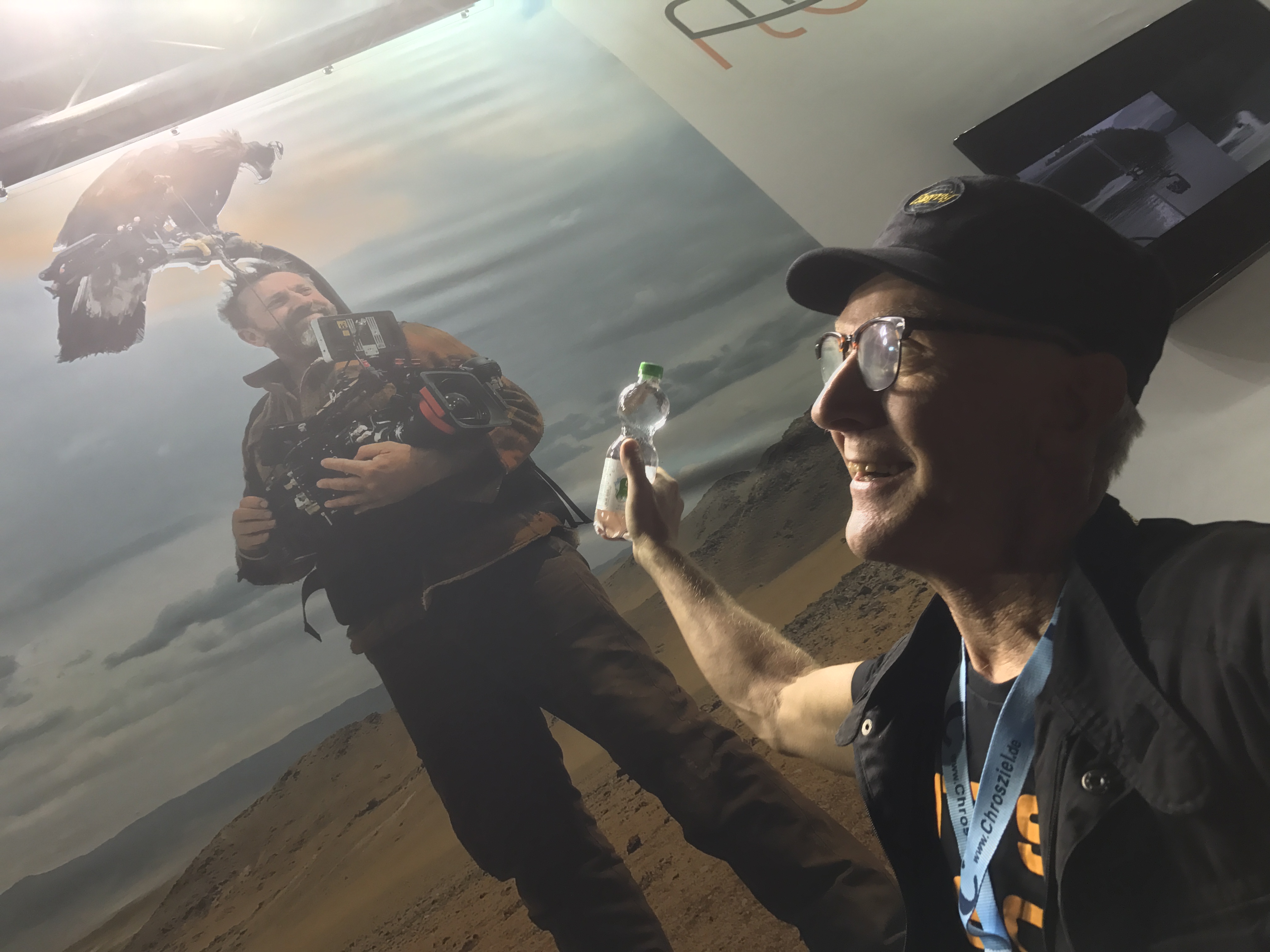 No IBC is the same without Johan.  You might have met Johan on one of our exhibition stands at the BVE show or BSC.  Johan is the inventor of the Easyrig.  He is the most passionate, kind, lovely and generous man you could ever meet.  He is also as mad as a bag of frogs.  His passion for our industry is exemplified in his invention – the Easyrig.  Johan showed us a couple of minor changes to the rigs and their bags.  The Easrig is a super popular product and it many respects almost perfect.

This video from IBC2016 shows the moment Easyrig paraded through the IBC exhibition with a Swedish flag and megaphone.  Sadly I missed capturing the parade this year which featured a Spanish flag.

This is an interesting a very simple idea from Genus.  A combination prompter and matte box.  Available in December the Script Shade is a regular Genus matte box with the addition of a bracket that accepts a sheet of mirrored glass.  The hood includes a bracket that clamps into the existing french flag top rail to transform your mattebox into a lightweight teleprompter.  Your Android or iOS device fits securely in a clamp attached to the 15mm light weight support holding the mattexbox / prompter.  When not being used as a prompter the mattebox accepts 4×4 filters and does exactly what a mattebox does without any compromise. For me these were some of the highlights of IBC, there were of course many more things on display.  Follow the link below to visit our website for the full and encyclopaedic list of new products for prices and more in depth details and specifications.  Until next year IBC!